Sights from a San Francisco Quarantine
Prev Next
Search

The thing about San Francisco—like all California cities and certainly more than those elsewhere—is it’s best experienced freely and outside.

Save for a few especially rainy and foggy months, it’s no secret our days are mostly sunny and in the 60s, thanks to our unique geographical location and unusual microclimate. We love our countless trails, beaches, hikes, and parks in which to enjoy them.

But like the rest of the world, we’ve been forced to adapt to these wild times. The six counties making up the Bay Area were the first in the country to enforce a “shelter-in-place” law for its six million residents. The shift was sudden and confusing at first, but since mid-March, we’ve come to know this mostly indoor lifestyle as the new normal.

Outside is a wild scene. Masks are required while in “essential businesses” like grocery stores, restaurants that offer to-go orders, and yes…even dispensaries. The non-essential businesses are mostly boarded up out of caution, as if preparing for a hurricane. There are fewer buses running, and I don’t think the trains or trollies are even running at all. By early May, the biggest tech companies said they’ll be working from home for the rest of the calendar year, and I presume the smaller ones will eventually follow suit. There are no crowds of tourists ambling around Fisherman’s Wharf, which secretly gives me hope they’ll never return and it can once again become a “cool” spot.

On a positive note, the city has closed down some streets—most notably, a major roadway through Golden Gate Park, which is our *ahem* bigger and better version of Central Park—to allow maximize space for joggers, walkers, and cyclists, who are thankfully allowed to use the parks so long as gathering size is minimal and proper spacing is practiced. During a walk of any distance, you’re bound to see some motivating street art by artists with messages of positivity.

All this, of course, is a very small price to pay for maintaining one’s own health and helping to flatten the curve. Yes, it sucks. Like, it really sucks. My coworkers, friends, neighbors, and I are all itching for normalcy. But it’s times like this where you need to count your blessings, not take things for granted, and be a good friend and neighbor. We’re all just people, trying to get through this.

And hopefully it ends soon. But while we’re in it, I made it a personal project to photograph what I could in order to document this experience, if only for myself to look back on down the road. In doing so, I’ve felt more connected to the city than I ever have. During every long walk, run, or urban hike I’ve taken these past few months, I’ve been shown new reasons to be hopeful and happy to live here. 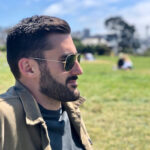 Cameron Vaile was born and raised in Richmond, Virginia, but has called San Francisco home since 2018 when he accepted a new advertising job. As an avid traveler, he of course decided to take the scenic route and made a two-week solo road trip out of the move rather than a three-movie-long flight. He loves exploring as much of the Bay Area as he can, and has recently taken up photography as a way of documenting his West Coast adventures for both his future self and envious family back home.