My husband and I were both raised as expats; I spent half of my childhood in the United States and he lived all over the world in countries as varied as Oman and Nigeria. We both felt that these early experiences had positively impacted us and decided that when we had children, we would like to give them the same opportunity to experience life abroad. And so, a few years ago, when my husband was offered a job in Paris, I had started packing up our London home before the ink was even dry on the contract.

Although I understand why many choose English language schools, we chose to put our children in the French education system so that they could learn a second language while they were still young enough for it to be natural. By the time we moved to Switzerland, both children were fluent in French. My husband and I were thrilled, especially as despite our international childhoods, neither of us had picked up a second language. Our plan had worked, we crowed to one another, we had raised little global citizens! Except, we realised, that in our desire to help them integrate, we’d focused so much on French and Swiss culture that they knew very little about the UK.

In truth, it was not only the desire to help the children settle into their new schools that had made us focus on holidays abroad, but the increasingly competitive approach to travel. Discussions with friends often seemed to centre around who had just returned from the furthest and most exotic destination. There was an assumption that a beach or mountain or lake on the other side of the world must naturally be more impressive than anything found closer to home.

And so, last year, we decided that on our next visit to the grandparents, we would stay for an extra week and give the children a tour (albeit extremely time limited) of the UK, with a particular focus on the north as, although we had often ventured south to Devon and Dorset, we had never taken the children further north than the Peak District. We used our travels as a launch pad to learn more about British history and geography; watching a Netflix series on British castles and reading history books at bedtime. They excitedly helped us plot our route from Edinburgh to York on a map, discussing the towns and cities we would pass.

When our travels finally started, it was as though the children were seeing history brought to life. They loved seeing Castle Rock and discussing the glaciers that helped form the British landscape, and they shivered to hear about the ‘Black Dinner’ during a tour of Edinburgh Castle. British history was now as real and fascinating to them as the French history they were learning about at school. We did all the touristy things that we usually try to avoid: a cream tea at Betty’s Tea Rooms in York and haggis in a Scottish cafe. The kids set the itinerary, selecting the Jorvik Viking Centre and Greyfriars Bobby as things they most wanted to see.

It was liberating not to think of the trip as a ‘once in a lifetime’ holiday. Usually, when you’re exploring an exotic location, you feel the pressure to see everything, do everything; knowing that if you want to tick off your bucket list of ‘must see’ destinations then you’ll never have time to return. We were able to reassure the kids that if there was anything we didn’t see this time, we’d simply come back another year. This attitude meant it was the most relaxing holiday we’ve ever had; if it rained or the kids were tired we simply found a cosy pub and took some time to relax and discuss what we’d seen so far that day.

The media tends to focus on the difficulties currently facing the UK, which may serve a vital purpose but does tend to lead to rather bleak news, especially in the international press. But when we were travelling, we were able to show the children so many of Britain’s positive qualities: the wonderful multiculturalism, the rich history, and the beautiful scenery. The children proudly purchased souvenirs that they could take into Show and Tell: a family tartan and some delicious scones to help counter any jokes about British food! They returned to school in January, still wearing their French football team shirts, still knowing more words to the Marseillaise than to God Save the Queen. But, hopefully, now more secure in the knowledge that integrating into a new culture doesn’t require you to completely forget the old.

It is a balancing act that immigrants and expats all over the world have to contend with, and I think, or at least hope, that we’re starting to get the balance right. It helps that the children’s school is incredibly welcoming: recently my son’s teacher allowed everyone in the class to sing ‘Happy Birthday’ in their native language for a classmate’s celebration: the little voices singing eight different languages in turn was an emotional moment, even if did mean that the birthday candles had burned up before the birthday boy could make his wish!

This summer, as we face travel restrictions and closed borders, we will all have to change the way we think about the world. COVID-19 has not only brought tragedy and financial difficulties to many but has altered the future of travel, perhaps forever. Those of us used to looking far and wide for inspiration will have to look within our countries, perhaps even our own towns for adventure. Despite feeling disappointment as my own summer plans are cancelled, I’m trying to remember the lessons we learned on our trip around the UK: travel isn’t about envy-inducing photographs on mountaintops and white beaches, it is about spending time with loved ones, seeing the beauty of the world around us, and with any luck, having some fun in the process. After all, for those of us who live abroad, some of our most fulfilling travels are those which involve going right back to where we started: home. 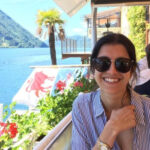 Asha Mentzer currently lives in Switzerland but has previously lived in England, France and the United States. She loves travelling and reading, ideally doing both at the same time. Her dream holiday is to combine both passions and visit Green Gables Heritage Place on Prince Edward Island.